After I re-painted Bill's bedroom, I took a week's holiday in Algonquin Park, and whilst swinging in the hammock decided that my next renovation project would be my son's back yard. Son-in-law Christopher was immediatly enthusiastic. David was less so, partly because he was doing a full-time pastoral education course over the summer, and he was exhausted.

Anyhow, here's why I chose that particular project: 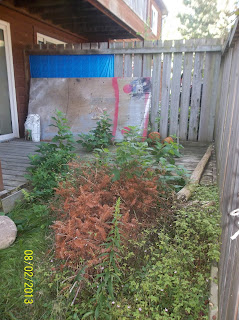 And from the other direction: 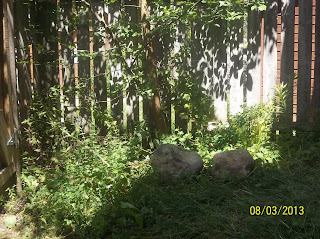 To wit: it was a haven for junk. Yes, that's last year's Christmas tree.

And it's small, not much more than twice the area of the bedroom featured in the last post.

First thing to do was clean the place up a bit: 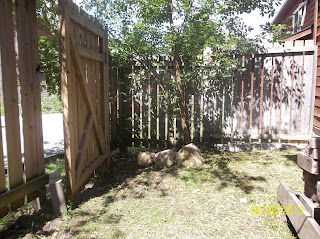 Already it's looking better, but clearing out the weeds and junk reavealed a heretofore unexpected problem. My son had said the yard had a "few dips." I wasn't expecting how bad it really was: 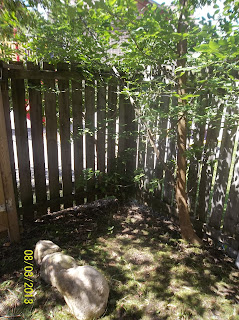 If you look at the fence in the back corner, you'll see it's about six inches above the ground, whereas nearer the gate, it barely clears the ground. And there was a trough next to the house wall, here partially filled in with a sand & gravel mixture: 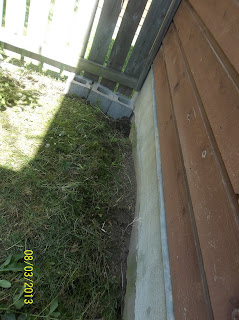 Not very pretty, even when cleaned up. This back yard is going to take a LOT of fill, and a lot of work.

My summer quote to live by has been: Start where you are. Use what you have. Do what you can. (Arthur Ashe)

I can hardly start anywhere else than where I am. I cleared out the mess, leaving me with a bare, uneven yard. What did I have?

Well, I have a relatively strong body, a Toyota Yaris which, according to cinema ads of a few years back can transport a Viking Army, and absolutely no money. But I do have the internet, and the internet has Kijiji, and I still find it hard to believe what I was able to find on Kijiji: 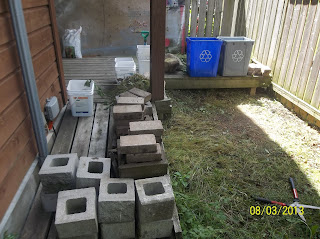 The rocks in the previous pictures were also part of my booty haul, and the bins and buckets are filled with the sand & gravel mixture that filled in the holes by the wall. The buckets have been filled (and emptied) twice so far. And I brought it all home, one load at a time, in my Yaris. I love that car!

First order of business: Dig a hole four patio stones wide and about six inches deep in front of the gate, which wasn't able to open fully because of the uneven terrain. It's here that David became more enthusiastic and put his strong arms to good use--he did almost all of the digging. Spread an inch or two of gravelly sand and level, then lay down the eleven patio stones we'd scavenged via Kijiji. Here's the result: 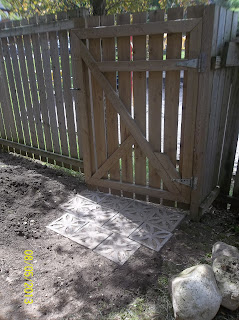 Next, prune one of the branches off the tree, and remove a scrub tree that was growing up against the fence post: 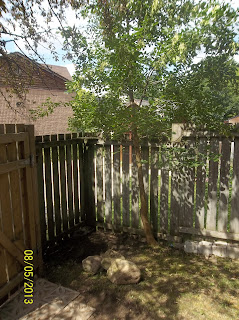 Removing the branch changed parts of the yard from deep shade to part shade, which will increase the number of options I have when it comes time to plant. 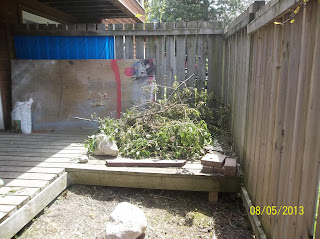 Yesterday, I took the brush pile above to the dump in my poor little Yaris, which by now needs major clean-up. I'll be doing that as soon as I know I've finished transporting sand, gravel and dirty patio stones! Total cost so far has been 3 dollars for a saw to cut off the branch (I used Canadian Tire money from my credit card), about sixteen dollars for the hedge trimmers, and about twenty or so dollars worth of gas.

Anyhow, today it's raining, so I'm taking the day off!
Posted by Ruth Cooke at 7:12 AM

Ruth Cooke
Ruth Cooke B.A, M.Div., MPS is a writer, public speaker, and itinerant preacher whose areas of expertise and interest include poverty issues and solutions, parenting exceptional children, sexual orientation, and the place of religious institutions in society. If you would like Ruth to come preach, speak or lead a class or group, please contact her via email.